Posted by Kaitlyn on 7:30 AM in Chinea Rodriguez Fashion Fashion News | Comments : 0 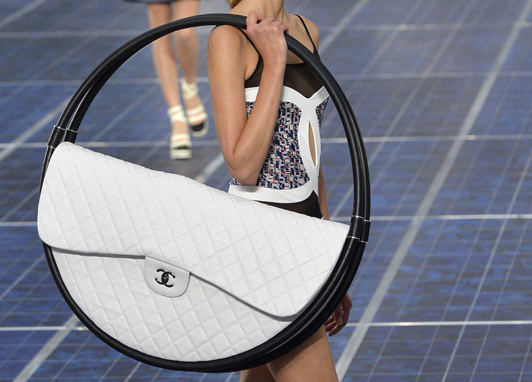 Paris Fashion Week is one of the most anticipated of the season. The city hosts the ready-to-wear shows of Chanel, Saint Laurent Paris (formerly Yves Saint Laurent), Christian Dior, Louis Vuitton and Givenchy, among others. There was a lot of buzz around this season in particular, because two designers were making their debuts and everyone was waiting to see how extravagant the final shows would be. During the last spring shows there was a carousel at Louis Vuitton and Florence Welch emerged from a sea shell and sang at Chanel, so expectations were high.

After some shakeups recently, two of fashion's biggest houses have new designers and they both made their ready-to-wear debuts this season. Raf Simons debuted his minimal collection at Christian Dior, and Hedi Slimane debuted his bohemian rocker-inspired collection at the newly renamed Saint Laurent. However, most of the drama was off the runways. Recently, a feud was rumored to be between the two designers and then a discrepancy occurred between Saint Laurent designer Slimane and New York Times critic Cathy Horyn when the critic was denied a seat at the debut show. After a less than favorable review of the collection, Horyn was the target of an open letter from Slimane, which surprisingly wasn’t the only one she’s received in the past month. She was also targeted by Oscar de la Renta and Lady Gaga.

Karl Lagerfeld’s spring collection for Chanel was sporty, beachy and lady-like. The models walked down a runway surrounded by windmills in striped wedges, oversized necklaces and transparent sun hats. What got everyone’s attention wasn’t the clothes, but the Chanel hula hoop bag -- yes, you read that right, and it’s exactly what it sounds like. A model in a bikini emblazoned with the trademark interlocking C’s and sunglasses with a Coco Chanel silhouette balanced an oversized Chanel bag made of two hula hoops down the runway, and it was crazy in the best way possible.

After using an actual train in his last show and a carousel in the one before that, Marc Jacobs obviously had to step his game up. So how exactly did he do it? The designer presented his mod collection with the models walking in pairs down working escalators and meeting on a yellow checkerboard floor. Anyone else dying to see what he’s going to do next?