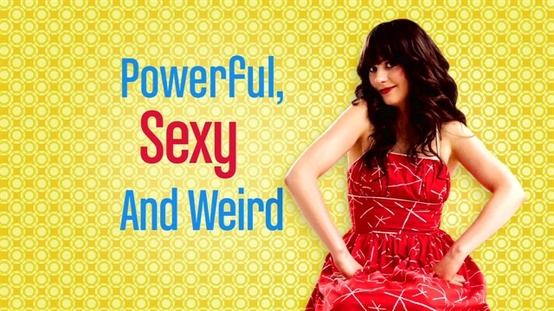 We already talked about our girl crush on Rachel Bilson, but believe it or not, there is no competition when she stands next to Zooey Deschanel. It is no surprise that everyone, from men to women, have a major crush on Zooey’s indie looks and voice, and we are no exception. Call us smitten!

Sure, some of us wish we had her thick, jet black hair and bangs, but what really sealed the deal for us was the return of her sophomore series, "New Girl." We will be the first to admit that when the series initially aired we vowed never to watch it because it seems like low quality entertainment! Sounds kind of crazy, but sometimes we can be TV snobs.

After watching the first episode, we were not entirely convinced, but for some reason Jess Day’s (Zooey Deschanel) and her roommates’ silly, adorkable antics held our interest for an entire season. Maybe it’s the fact that she loves to randomly burst into song, or that we love her girly 60s-inspired outfits, but she reminded us a lot of, well, us.

For those of you who do not understand why Jess and Zoey are everybody’s ultimate “it” girl, let us enlighten you.

1. We have a feeling that Jess and Zooey are a lot alike. We simply love Jess Day! We love her long bangs, her cute, grandma-styled cardigans, poofy skirts and her bubbly personality. Part of us wishes that we had the guts to let it all out there without feeling silly or embarrassed. Even if Zooey shares few qualities with her character (which we doubt), her portrayal is immaculate and credible. Afterall, Zooey Deschanel did get nominated for a Golden Globe and an Emmy in 2012 for her portrayal of Jess!

2. We love the catchy tune, which Zooey co-composed! Sing it with us: “Who’s that girl? It’s Jess!” That song always gets stuck in our heads, and we love it even more because Zooey sings it!

3. We love her boys, and by that we mean her roommates! Schmidt has got to be one of the funniest male characters on TV right now. He’s a new kind of alpha male portrayed on screen: he owns his flamboyance and metrosexuality, but somehow remains a stud. Nevertheless, his punchlines are witty and never cross into an offensive territory. As for Nick, we all know Jess and Nick have an unspoken love story developing. We love the contrast between these two love birds, Nick’s a grumpy grandfather and Jess is a Lisa Frank drawing bursting with unicorns and rainbows; we are curious to see their love blossom. While Schmidt is the scene stealer, Winston is usually left out in the cold as everybody’s backbone. Our only critique is that he needs a more compelling storyline!

Tune in; you won’t regret it. Half of you will wish that you were Jess Day or that Jess Day was your weird, cute BFF. We are proud to call her a modern day Phoebe Buffay who can actually sing. Now we are just wishing to hear Zooey’s rendition of “Smelly Cat” and that will make our year!