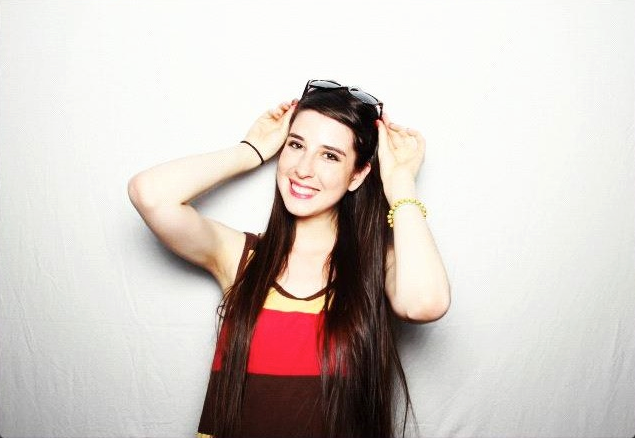 Meet Emilie Schwenk -- and remember the name, because someday you will be reading her magazine! She is Taylor Tomasi Hill blended with Alexa Chung. She is reminiscent of Hill for her trendsetting editorial powers and Chung for her bohemian street style!

At 20 years old, Schwenk’s journey as a college student has been a nomadic and unpredictable one. Nomadic because she has lived in several locations in New York City in less than two years. She has resided in Brooklyn Heights, Coney Island, then in Harlem for a bit and migrated back to Chicago. Talk about stressful!

Her big move from the Big Apple to her hometown of Gurnee, a few minutes away from Chicago, did not slow this girl down. Changing schools can be disheartening, but Schwenk’s refusal to sulk prompted her self-discovery.

During her first year in New York, she attended the Art Institute and majored in fashion design. Her hopes of becoming a men’s fashion designer evolved when she interned at Family Circle. She now hopes to be a market editor. For you ladies who don’t know, a market editor is the sole curator and producer of those beautifully selected pieces (jewelry, clothes, beauty) in magazines! Imagine being a fashion curator and your museum is the glossy pages read by and drooled on by many ... best job ever, right?

Hello, the Devil Wears Prada! And we could not be any more proud (hint, hint, we love writers and editors!).

“If I could do anything, and money was no issue, and fear was no issue, I would be a fashion designer," Schwenk said. "But now, I have found a love in writing,”

Although we are excited to read her first article in print, we also believe she has the chops to be a fashion designer. Just look at the newspaper trench coat she designed for a fashion competition, Trash-Chic at the Art Institute, where contestants could only use recycled materials. 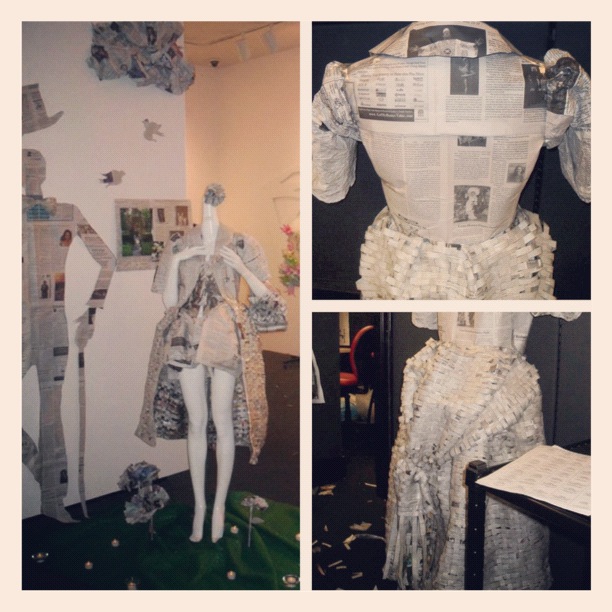 “I chose newspaper,” Schwenk said. “I took newspapers, and I laminated them, and I cut them into half-inch strips, and then I weaved them together in a regular basket weave. Then, I made a trench coat out of them. That trench coat took me at least three weeks to do.”

Like a true journalist, she said, “I won third place, but it was so political. The first place winner worked at the administration office.” Sounds like the competition was totally rigged! “Whatever I’m over it ... it was two years ago,” Schwenk joked.

Like a true long-legged New Yorker, before her life-changing move back to her hometown, Schwenk had a couple of run-ins with the modeling world. She has walked in a few runway shows, but her first modeling experience came from a shopping outing at American Apparel, where she was recruited for a photoshoot. 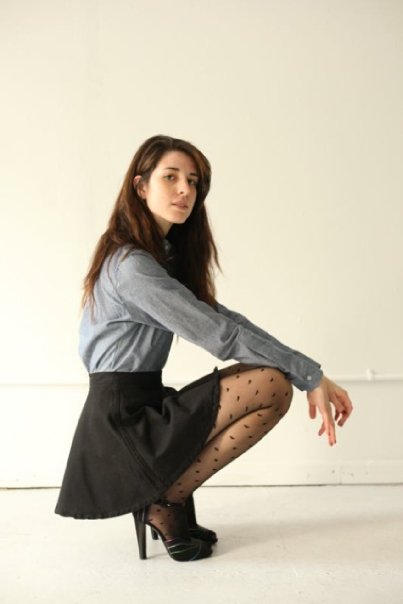 This image became an American Apparel flyer! You go, girl!

Mind you, Schwenk tells us this in a charming way, no bragging involved. She is extremely shy, the girl next door. With classic features, long dark hair, hazel doe eyes and porcelain skin, you definitely grasp her suitability for the brand. And as a true scholar, she never wishes to trade in a few photo shoots for her career as a student and future journalist.

Back in Chicago, Schwenk wrote fashion articles for her school’s newspaper. After applying to the highly competitive and prestigious fashion school in New York, Fashion Institute of Technology (FIT), she was accepted and moved back. She couldn’t bear being away for more than a year. With a hint of nostalgia in her voice she said: “After living in New York, Chicago just wasn’t New York.”

Her perseverance and love for her future career motivated her efforts in her acceptance into FIT. Before school began at FIT, she interned at Lucky Magazine during the summer as an accessories intern: her second welcome to the big city.

When we asked her why she belonged in New York, she fiercely exclaimed: “New York is the center of the universe for fashion. There’s really no fashion in Chicago; people do follow trends, but it’s not the same. New York is the starting point for everyone, even those in other countries.”

Now at FIT, she majors in advertising marketing/communication. She is expected to graduate in May 2013 with an associates degree, and hopes to be accepted into the bachelor’s program for fall 2013.

Aside from the stressful school days filled with a total four-hour commute, five days a week, Schwenks mentions that the best thing about attending a fashion school is that “there’s always inspiration. There’s always something interesting to look at, and I am a big fan of that. Everyone is so creative.”

“They are more animated, and more outwardly present," she said. "I just don’t know how to describe it. They walk into a room, and they are 10 feet tall. I love that, I love people like that.”

Other than co-studying with fierce future fashion designers, Schwenk loves her magazine journalism class. “It’s taught by Allison Leapold, and for 20 years she’s bounced around magazines at Hearst,” Schwenk said. “She wrote a lot for Seventeen; she’s written five books. She’s extremely knowledgeable, and I am really thankful to have her as a professor. We look at the style of writing in magazines and the tones.”

Already Schwenk is being taught by a practicing journalist who has written for Vogue and Harper’s Bazaar. Her career as a magazine editor is on its way!

Schwenk now writes a weekly sports column and a monthly event column “Outside Your Borough” for FIT’s newspaper, W27.

Ultimately, as a future New Yorker, Schwenk believes that you have to dress the part. “How you feel on the inside has a lot to with how you feel in the outside. A lot of people say, when you are not happy, just start smiling and your mood will follow. If you feel groggy, or like a slob, and you put on a nice outfit, you change. You start feeling better.”

Schwenk has walked in many people’s shoes as she migrated from one place to another. But she leaves us with a few key messages: Feel good inside to do well on the outside. If you find a place you can call home, and which you belong in, go to it. Build the foundation for the life you wish to have!