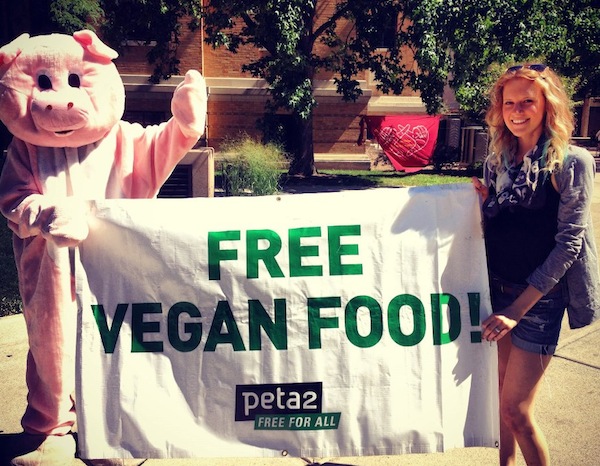 Standing at 5’6” with blue, crystal eyes and blonde hair, Amy Gorski is not your typical American college girl. She embodies that all-American beauty, but her passions represent only two to three percent of American living -- Gorski is a proud vegan -- a surprising fact in a world where Hollywood constantly persuades the public to try detox diets, juice cleanses and to adopt a vegetarian/vegan lifestyle.

Gorski, or as her friends call her, Aim, recently graduated from the University of Wisconsin-Milwaukee, where she majored in communications. After graduation this past May, she embarked in a national tour with peta2, the largest animal rights group in the world.

Her journey with peta2 began when she decided to go vegan sophomore year of college. During the initial stages of her dramatic lifestyle change, she realized that her school had very little vegetarian and vegan choices.

“I couldn’t eat the same meal everyday,” said Gorski, referring to pasta. “So, I contacted peta2 out of frustration and [told them] I wanted to make changes at my school. I didn’t know what to do and that’s when they said, ‘Okay, we’re going to help you out.’”

Now more than two years later, the University of Wisconsin-Milwaukee has an all-vegan section, which Gorski proudly recalls as her legacy. On her next project, she joined peta2 on a national tour to inform other students and inspire change within people.

After graduation, “Ryan Huling, peta2 director of College Outreach called me up and said, ‘Hey, we need someone to fill up this hole; it’s just the Midwest, and it’s only for two weeks,’" said Gorski. “I had a couple of weeks to spare, I packed my bags and met the team in Madison, Wisconsin. We went to Wisconsin, Michigan and Ohio. We got petitions using iPads now instead of using paper and pen, a little different than what I had experienced when we worked with peta at my campus, but, nonetheless, really effective.” 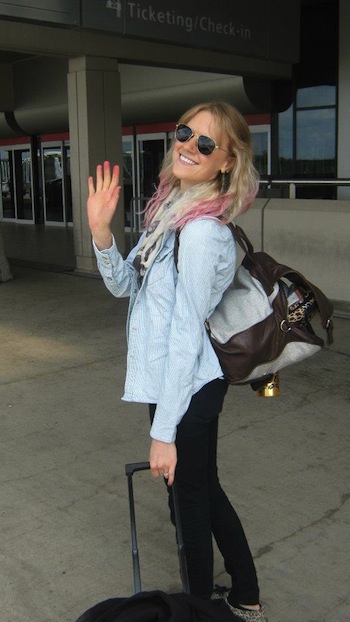 We just had to post this picture of Gorski leaving home to Madison. As soon as we saw it, we couldn’t resist and had to ask about her hair! She got it done at Ulta for five dollars. Gorski raved in an email: “[The color] let me have some fun without commitment (like how most boys see relationships these days). It didn’t stain my hair, which is the best part. I like to use it when I curl my hair, since it looked weird when my hair was straight. Blue was my favorite since not too many people have blue hair.”

During the tour, Gorski and the peta2 team gave people informational literature about the food industry and environment and the connection they needed to accommodate their lifestyle into healthy living.

Gorksi and the collaborating team wanted to help people make a connection for change. For her, it had come more natural; her sentimental connection with animal welfare and animal rights prompted her transformation. 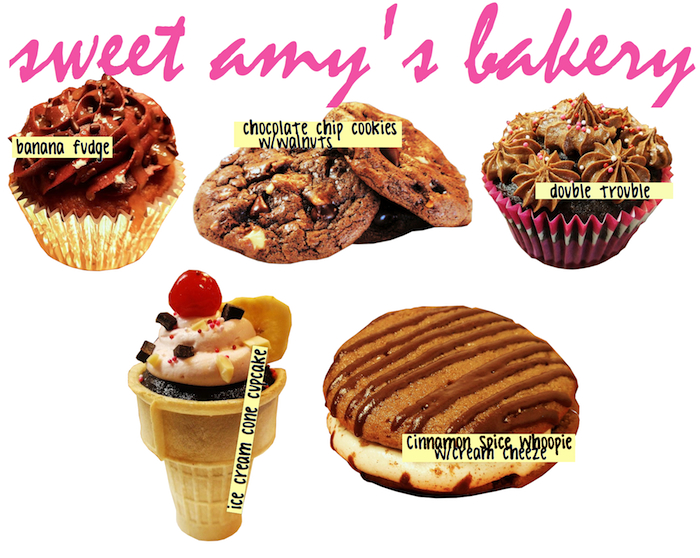 Along with her vegan transition came her desire to bake (to make yummy treats she could actually eat). With this newfound love, Gorski began experimenting and adjusting to her vegan lifestyle by posting every sweet treat she concocted to her blog, Sweet Amy’s Bakery and Facebook page, which has extra goodies!

Some of her original and yummy recipes have been featured in Made Just Right, an extremely popular website for all things vegan! Let’s just say, they make dairy-free butter! Sounds impossible, but it’s TRUE!


Aside from being featured in “Made Just Right,” one of Gorski’s proudest accomplishments came when the owner of Verduras Tea House and Cafe in the Historic Third Ward of Milwaukee Jennifer Nowicki contacted her.

“She was looking to have some baked goods go along with her tea and sandwiches,” said Gorski. “She heard of me through word-of-mouth. I had an interview with her and brought in some samples. It just snowballed, and we worked really well together and brainstormed different ideas.”

While juggling school work and recipes, Gorski woke up Friday mornings at 5:30 a.m., even when she did not have class, and began baking. By eight in the morning, she was on a bus to deliver her cupcakes.

“It was rough waking up, trying to bake, but it’s going to prepare me for when I have my own bakery,” said Gorski. “It was something that I like doing, so I didn’t mind waking up at the crack of dawn to do it.”

When asked what her favorite cupcake was, she said: “Ah man, that’s like saying what are your favorite pair of shoes?!” See ladies, you’re not the only ones with a cupcake addiction.

Gorski’s ultimate dream is to open a startup bakery in Chicago, then branch out to New York, Los Angeles and Seattle or Portland, which Gorski likes to say, “is the mothership of the vegan community.”

This fall, Gorski is back in school. Although, some may view her as an expert in her craft already, as she began attending Kendall College School of Culinary Arts in October. After some tough competition, she was awarded a scholarship to pursue her passion. Upon meeting with the school’s president, Emily Williams Knight, Knight confessed: "Oh yes, I know you! I drooled over your cupcake photos,” as we all just did, too!

Gorski has learned much from her experiences and leaves us with this advice:
1) “Word of mouth is huge in any industry.
2) Do something you love. Then, waking up at 5:30 a.m. won’t be so tedious.
3) Be proactive! Enter competitions, email people, go to fairs and befriend those with the same interests.
4) Don’t knock it down until you try, like veganism or vegan treats.”

Gorski is just one of the many college girls who found a passion and made it work through persistence. Whatever your passion may be, you can always start small - especially at school. If you haven’t found that feeling yet, but you believe there’s room for improvement in your school or in your life, be proactive and maybe a passion will find you.

If you want to check out some of Amy’s recipes, here is a link to her “Baked Cilantro Onion Rings with Chili Lime Barbeque Sauce.” And here you will find her “Brown Sugar Balsamic Ice cream.” Yes you read right, VEGAN ice cream!