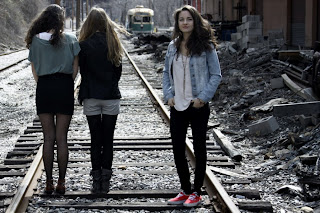 Taylor Broom, Kelly Rosenthal and Maddie Freeman aren’t your regular group of best friends. The trio are the front women of the up-and-coming band “Say Chance,” a musical group that creates soft, soothing and melodic easy-listening music that is relatable and fun to hum along to.

The group’s premier E.P. features three all-new songs: “Parade,” “This Far” and “Miss You Now.” These tunes are soft and can make amazing background music while studying for tests or working on homework. The girls’ soft, smooth voices blend beautifully with the breezy guitar, making the perfect musical combination. The process of recording and releasing their first E.P. was a journey filled with ups and downs, but overall the band wouldn’t take back one second of it!

How did this fabulous band come to be? It all started when music-lover, Kelly Rosenthal, a Sacramento, CA girl discovered Taylor and Maddie’s YouTube channel. The channel broadcasted videos of the two best friends singing their hearts out, and the passion and hard work behind the music compelled Kelly to reach out to the two-some.

One thing lead to another and before they knew it Kelly was becoming extremely close with Taylor and Maddie. The only problem? Taylor and Maddie lived in Baltimore, Maryland, making a face-to-face musical collaboration impossible…or so they thought. The three girls discovered ways to virtually collaborate online and eventually made plans to meet in person. Due to the success of their online friendship and viral musical collaborations the girls thought it was about time to try and form a real band and start recording in studios! In no time, Say Chance came to be and their first E.P. was released!

The Say Chance story goes to show you that anything is possible, and it is not about how far away you live from someone, or how impossible your dreams may seem... if you have determination and work hard you can more than exceed your expectations. There is no doubt that the girls of Say Chance will continue to reach for the stars and strive to make all of their dreams come true. 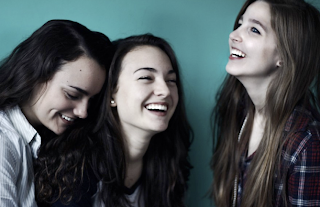 What will the next part of their journey be like? CG’s Annie Robinson had the privilege of conducting an exclusive phone interview with Kelly Rosenthal of Say Chance. Read on to find out more history about Say Chance and their first E.P. as well as what’s next for these successful young women...

How did you form the band Say Chance?
KR: I was browsing the Internet and found videos of Taylor and Maddie singing their hearts out. They were amazing and I felt compelled to say something. We started an online relationship from there and were always discussing music. We started collaborating virtually and created a split-screen collaboration over the Internet, and in the process of us sharing vocal files we discovered that we had so much in common. We developed such a great friendship beyond the business of what we were doing. Our web collaborations worked out so well that when we met in person and started making music together it felt very natural. Everything fell into place and we became “Say Chance!”

What is the hardest part of being in a band?
KR: When you take three girls sitting around in their bedrooms making music and then put that under a microscope and start to make a business, it is a hard juxtaposition between what is casual and organic for you and the things you have to do to grow your band in terms of a fan base and appeal in the public eye. It is hard to juggle. It is a very demanding job, but in the best of ways.

Has music always interested you?
KR: I played piano from a young age, but it was not mine…it was what my parents wanted for me. When I was 12 I stopped, and at age 14 when I was in high school I decided I wanted to play an instrument that was strictly mine. I wanted to learn how to play the guitar and my parents supported that choice, and ever since then I have never looked back.

How did you pick your band name?
KR: A band name is what brands you, so coming up with a band name was tough. Say Chance is a combination of two of the songs that brought us together. We think it feminine, but without being too girly.

What is your favorite song on your current E.P.?
KR: It changes all the time! I think right now it is “This Far.” It is the first song we wrote together and I think it was the experience of creating something as a group that was just really awesome.

What was it like recording the E.P.?
KR: It was really interesting. We were all feeding off of each other while we were recording; it was a very interesting and great process. It was new to all of us, but I felt really good about it.

What is the best part of the music industry?
KR: Having the opportunity to relate to people on a very wide scale is amazing. This industry is your vehicle to the world, and that is amazing.

What singers have influenced your music most?
KR: John Mayer! We’ve all listened to him for a long time and his musicality is insane. If we can just capture a fraction of [John Mayer] when in the studio that would be amazing… he is just so incredible!

How does performing on stage make you feel?
KR: I get really nervous. I love sharing music...but none of that would ever stop me from wanting to do this. 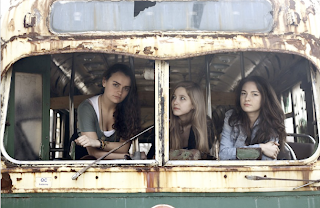 Do you have any pre-performance rituals?
KR: We started this thing where we write each other little notes during sound check and we hide them for each other on stage so when we perform we find them. It is great because we can look down at a note that is so reassuring from another band member. It has really helped loosen things up for us, which is really cool.

What is your favorite outfit you have worn to perform in?
KR: I’m all about being comfortable and I’m really into simplicity. I can’t live without a white v-neck, so that is what I like singing in.

What should fans look out for from Say Chance in the future?
KR: More writing, more live shows and hopefully a full-length album, too!