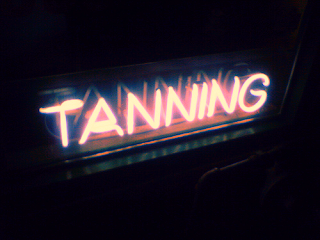 The picture perfect American beauty is typically portrayed as blonde, thin, tall and most importantly: tan. While achieving this California dime look may seem harmless, new research from The Archives of Dermatology reveal that tanning is another form of addiction and as physically detrimental as cocaine abuse.

New York Times author Tara Parker-Pope writes about the shocking findings in her article, Is Indoor Tanning Addictive? “In the study, 78 percent of the most frequent tanners said they had tried to cut down on indoor tanning but had been unable to,” Pope said. “Frequent tanners reported missing scheduled plans because they had opted to use a tanning bed instead.”
Frequent exposure to UV light produces opioids in the brain, more commonly referred to as endorphins. Indoor tanners report feeling happy, calm, and relaxed and brain scans prove that the body is at a heightened state of contentment, writes Parker.
Dermatologist Dr. Robert McDonald says he sees tanning addiction all too often in his patients.
“The problem is only getting worse as affluence increases,” McDonald said of this 21st century affliction. “People have more money so their going on beach vacations to [places like] Cancun.”
As beauty is glamorized in the media, it’s often synonymous with bronzed skin, and the young, carefree attitudes of Americans youth are being translated over to their health.
“The threat is so far removed people aren’t paying attention to it right now,” McDonald said. “It’s like saving for retirement, it’s something you should do, but if you don’t you might be ok, it’s also like telling a 20 year old ‘you better stop smoking now or you might get cancer in 30 years’; it’s hard to see yourself down the road.”
The human brain responds to UV light and almost immediately a bio chemical reaction triggers an addictive response, McDonald said. With nearly 30 million Americans tanning indoors every year, the habit isn’t going anywhere soon.
“We have 20 times more melanoma than in the 1920s,” McDonald said about the increased frequency of skin cancer. “It’s the kind of thing that happens when you’re young, before 25. It a cycle between the beach and the tanning bed.”
UW-Madison student Kayla Gross’ bronzed-skin-bliss took taken a turn for the worse last May. After developing a strange growth on her leg, dermatologists confirmed that Gross had skin cancer.
“I loved the warmth. If I didn’t go I wouldn’t feel right,” Gross said when asked why she continued the unhealthy habit.
An avid tanner throughout high school, Gross tanned for 20 minutes every other day. No eye goggles, no sunscreen, and no worries.
“I used to say ‘skin cancer isn’t a big deal, they just cut it off and remove it.’” Gross said about her outlook on cancer in high school. “I’ve had basil cell three times now, and I have the scars to prove it.”
While Gross had a wake-up call early in life, many of America’s youth aren’t so lucky.
“There’s a long time before this goes away,” McDonald said. “It’s an addictive behavior that’s only going to get worse.”
By Jourdan Miller | weheartit.com