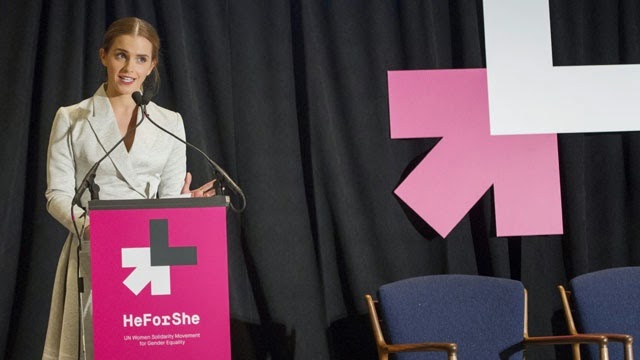 You may have seen various celebrities including Harry Styles, Sophia Bush, Joseph Gordon-Levitt tweeting and posting photos with signs reading “#HeForShe” over the past few weeks. A few weeks ago, Watson gave an inspiring speech at the United Nations Conference on the importance of gender equality and advocating for the HeForShe campaign. Here are four reasons why you need to watch (or read) this speech, if you haven’t already:

1. Men, gender equality is your issue too
Yes, that’s right - gender equality is a men’s issue too. As mentioned in her speech, feminism isn’t just a “women’s issue,” it’s everyone’s issue. Lots of men struggle with gender stereotypes whether it’s pressure to be more masculine or being unable to express their feelings because it will make them look weak.

2. Feminism isn’t about man-hating
When people hear the term “feminism,” they often associate it with man-hating. This can’t be further from the truth. Feminism is about believing that people should have equal rights regardless of their gender.

3. Emma Watson faces the same gender challenges
It’s refreshing to hear that Watson has experienced gender inequality as so many other women have dealt with. She talks about being called “bossy” because she wanted to direct plays when she was younger and being sexualized by the press at the age of 14.

4. It’s thought-provoking
The discussion offers insightful questions including, “How can we effect change in the world when only half of it is invited or feel welcome to participate in the conversation?” and “If not me, who? If not now, when?” The speech makes you stop what you’re doing and personally reflect on your own experiences with gender inequality. After watching Watson’s speech, I thought of all the challenges I’ve encountered relating to gender inequality.

Gender inequality is an issue that applies to everyone and Watson’s speech has laid the foundation for conversation.