Posted by Liz on 5:30 AM in Entertainment Lauren Sawyer Lifestyle | Comments : 0 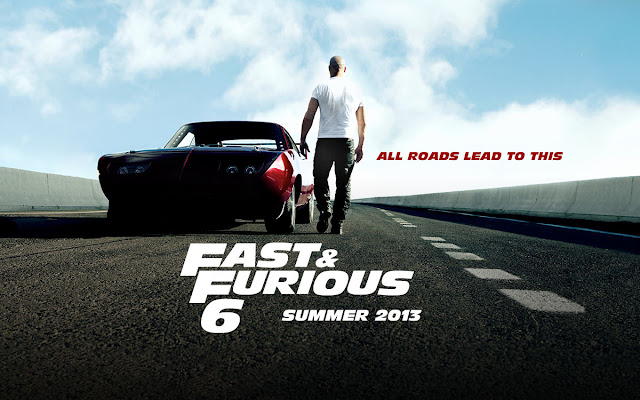 From extreme racing in souped up muscle cars to the powerful bond of family, the filmmaking team, director Justin Lin and producers Neal H. Moritz, Vin Diesel and Clayton Townsend, has built on the "Fast and Furious" series, especially "Fast Five," to create "Fast and Furious 6," which packs a big punch.

College Gloss got an inside look at this global blockbuster in a Google Hangout session with Gina Carano, Gal Gadot and Elsa Pataky, moderated by Roth Cornet of IGN. And we found out why you shouldn’t expect the men in the movie to bring all the action. "Fast and Furious 6" will hit theaters on May 24 in the US.

You can watch the entire Google+ Hangout session here.

Moviegoers will see Vin Diesel, Paul Walker and Dwayne Johnson lead the returning cast of all-stars as the global blockbuster franchise built on speed races to its next continent in "Fast & Furious 6," when Hobbs (Johnson) enlists Dom (Diesel) to assemble an elite team in London to take down an organization of lethally-skilled mercenary drivers.

But the men better watch out. 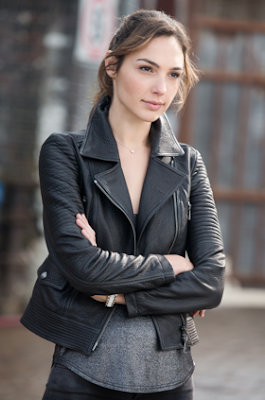 As Gal Gadot (pictured above) said in the Hangout, the women of "Fast and Furious 6" aren’t just going to be saved by the heroes ... because they are heroes.

One of the biggest fight scenes takes place between two powerhouse women, Gina Carano (who plays the cop Riley) and Michelle Rodriguez (who plays Letty Ortiz). Diesel and other cast members had to start personal fitness programs months before filming, which also continued through production. However, Carano, who pioneered the way for women in MMA competitive fighting, just maintained her usual regimen and concentrated on the choreography for the girl power-packed fight. The scene has no visual effects; it’s 100 percent practical fighting. (See a sneak peak here.) 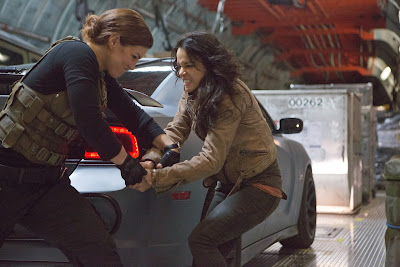 Lin recalls the day they shot the subway fight, “For Gina and Michelle to show up and tell their stunt doubles to take the day off because they’re going to try to do everything themselves is a testament to how hard they work. That makes all of this worth it.”

Johnson is also enthusiastic about his co-star, “Gina is everything that Riley is. Not only is she beautiful, but she can kick ass. She brings an authenticity to that role that is hard to find in Hollywood.”

Gal Gadot (who plays Gisele Harabo) was first introduced to audiences in "Fast & Furious" as a top lieutenant in Braga’s (played once again in this film by John Ortiz) organization who aligns with Dom when Braga forsakes her to save himself.

The Israeli actress amped up the action for this film, completing many of her own stunts in "Fast and Furious 6," including riding a Ducati Monster motorcycle like a pro.

“I’m so happy about all of the action in 'Fast & Furious 6' since in the previous two, I didn’t get to do as much,” Gadot said. “I’ve long told Justin, ‘I want Gisele to be more of a badass. Whatever you throw at me I will do. I want to do it all.’” 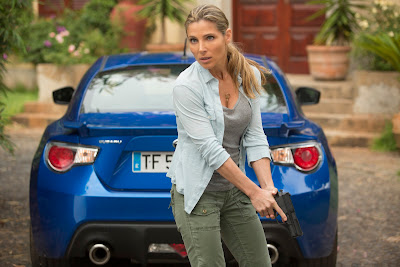 Elsa Pataky’s (pictured above) power came more from the emotional, rather than physical, challenges her character had to endure. Her character, Elena Neves, is in love with Dom Toretto (Diesel). With the reappearance of Letty (Rodriguez), who was Dom’s former love, she must determine what is the right thing to do -- fight for Dom, or let him go.

“Elena would rather Dom stay with her,” Pataky said. “But as long as there is any possibility Letty is alive, Elena knows that she has to be brave and let Dom figure it out.”


The whole Hangout provides a fun, insider look with the kick-but gals of "Fast and Furious 6." They’ll even reveal which of the tough-looking guys are actually “softies.” But if you don’t have time to watch the whole video, here is the excerpt where I spoke with Gina Carano (pictured below). (Follow the link to jump to this portion.) 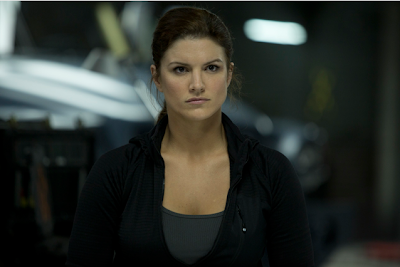 I asked, “Gina, you touched on this a little bit, you were able to do your own stunts. I'm just curious, were the stunt coordinators ever intimidated by telling you what to do?”

Gina Carano took it a little more seriously, but gave great info: “Gina Carano: You know what, no. I think when they're a good stunt coordinator, they welcome me to be creative and put my input in there.”

Gina concluded: “Thank you. No, but Olivier was amazing, and he not only invited me to be more creative, but he also taught me things and taught me things about my character who is a cop. And mixed martial arts is, you know, that’s a certain aspect of training, but there's a lot that you don't train for in a cage that you train for in being a cop.”