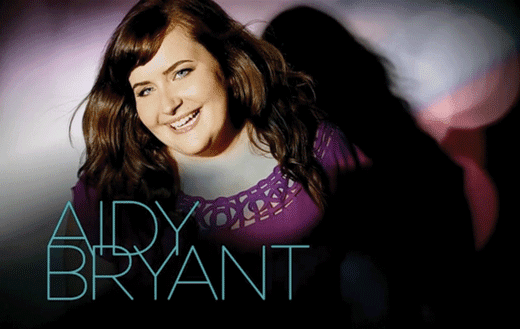 When it comes to comedy, Aidy Bryant makes improv acting look like a breeze. Aidy Bryant, one of the funniest newcomers to hit the popular NBC show, "Saturday Night Live," is amusing, entertaining and she isn’t afraid to be goofy and go all-out on the show. She’s not only a great role model for those who are interested in acting and improv, but she is also a role model for all young women because she proves that you can be the best you that you want to be, no matter what anyone else thinks.

The soon-to-be 26-year-old is an Arizona native, and she also is a graduate of Columbia College. While studying in Chicago at Columbia College, she also was a student at the iO Chicago Improv Theater, where she was perfecting her improvisation and performance skills. Following graduation, she was a part of the Second City E.T.C. Stage as an ensemble member. After continuously working on her material and improv sketch techniques, it all paid off: she was hired as a part of SNL’s 38th season cast.

1. “Comedienne” doesn’t do her justice
Aidy Bryant is more than just a comedienne; she is a brilliant performer. Along with her theatre degree from Columbia College and her training at the iO Chicago Theater, she also learned much of her expertise at the Annoyance Theater. Bryant has charmed many audiences in Chicago and television viewers of SNL alike, with her improv finesse and knack for knocking one’s socks off in her skits. Some of her most memorable skits to date include co-host of the SNL skit, “Girlfriends: Talk Show” (as Morgan) along with her improv skit “Short Squeeze,” a mock infomercial about a massaging business.

2. She gets by with a little help from her friends
Bryant is both humble and imaginative when it comes to her acting and improv work, and she is a first-class performer in terms of making an audience laugh as a solo artist, and as a group talent. Bryant has a vibrant energy that she uses to feed off her fellow improv ensemble actors, making any skit that she is a part of, whether it is a smaller role or a bigger role, help her shine throughout the act. Also, she has worked with several of her current SNL cast members before making it big in New York, including Vanessa Bayer in the skit “Swear Jar” at the Annoyance Theater.

3. Bryant kicks her critics to the curb
Though some have cited that Bryant is “too big” or just not the “type” of actor that should be featured as a part of the SNL crew, it is clear to many audiences that Bryant’s ability to crack a joke and make others smile and laugh has nothing to do with her being plus size -- if anything, her personality helps her internal beauty shine through to her external self. As featured on thedemotv.com, Cassie Belek said, “Bryant’s casting is a significant win for plus-size women in entertainment because even though Adele is winning Grammys and McCarthy is winning EMS, it’s still Hollywood, and there’s still a bias against larger women. Hollywood’s weight problem is far from solved, but thanks to Bryant and [Lorne] Michaels, it’s getting a little better.”

4. She’s bringing ‘grounded’ back
Aidy Bryant, as talented as she is, has stayed extremely modest and humble about her new fame as a featured player on SNL. Though many would have inflated egos about receiving praise for their improv, Bryant has remained completely grounded about the success of all of her hard work.

5. She’s here to stay
Most likely to follow in the footsteps of SNL female powerhouse predecessors Kristen Wiig, Tina Fey, Molly Shannon and Amy Poehler, Bryant is here to stay. In the comic world, Bryant is fresh, bold and her talents surpass her improv skills. Like compatriot Tina Fey (who wrote the teen cult classic, “Mean Girls”), Bryant has also written many comic skits, especially while she was working in Chicago at the Annoyance Theater. Bryant’s resume also includes performing musical improvisation comedy, to boot.

Aidy Bryant is sure to be a future comedy legend, making her initial mark on both "Saturday Night Live" and her past Chicago improv experiences. Her career has endless possibilities, and College Gloss is anxious for her next big role (or even her big cinematic break!) ... but until then, CG will be looking forward to “...live from New York, it’s Saturday night!”