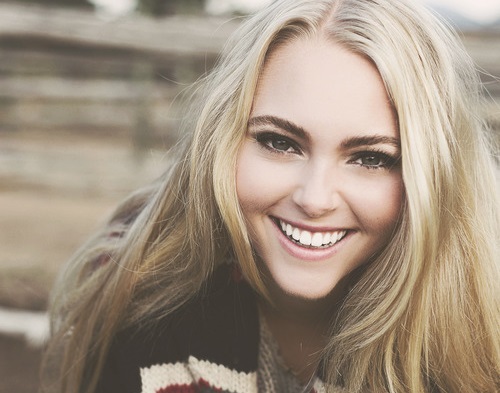 AnnaSophia Robb, star of the hot new CW hit "The Carrie Diaries" isn’t a rookie when it comes to the acting game. This 19-year-old Hollywood veteran has been a favorite of CG, and we are loving her as the pre-"Sex and the City" Carrie Bradshaw! Robb brings a vibrant spunk to the Carrie we know and love, and it’s going to be a great watching her transition from a young adult to the sophisticated New York City-obsessed freelance writer.

This Denver native has been acting since she was 5-years old, and she has starred in films like "Because of Winn-Dixie" with Jeff Daniels, "Race to Witch Mountain" with Dwayne Johnson and "Charlie and the Chocolate Factory" (as the memorable Violet Beauregarde) with Johnny Depp. Robb is a major inspiration to CG on and off screen; read on for five reasons why College Gloss loves AnnaSophia Robb!

1. She has spunk
AnnaSophia Robb is both spunky and relatable as the teenage version of the Carrie Bradshaw. It’s refreshing to see such a bouncy, golden girl with a girl-next-door edge and sex appeal, honor the role of such an important female character. We cringe to think she almost turned down the role! Originally, Robb thought the show would be too much of a commitment, and she wanted to begin her college career at Stanford University. But after reading the script, she changed her mind. In an interview with teenvogue.com, Robb stated: “I realized it was actually a really strong story. It had a lot of heart and integrity, and Carrie seems like a character that I can grow with.”

2. She has drive
Robb has been acting since her kindergarten days, and she brings drive and determination to each of her roles. AnnaSophia Robb inspires those who are entering the acting field to take on challenging roles, like when she played Bethany Hamilton in "Soul Surfer" with Dennis Quaid and Helen Hunt. In "Soul Surfer," Rob portrayed a Hawaiian surfer who lost her arm in a shark attack yet still went on to become a surfing champion. Robb was fascinated by the story, and she agreed to take on the role when she was told by director Sean McNamara that the Hamilton family actually recommended her for the part!

3. She is involved in charity work
Aside from acting, Robb also takes another role seriously, charity work. Robb understands the importance of giving back to those who are less fortunate, and she approaches her charity work with an enthusiasm that is both notable and admirable. She is involved with PeaceJam, an education program, which aspires to build up a new generation of international peacekeepers. In the summer of 2008, she traveled to India to volunteer with The Dalit Freedom Network. The network provides education for the Dalit people.

4. She has other cool talents
It may seem like this is a bit of a “duh” reason, but Robb’s skills aren’t limited to acting! She has a knack for gymnastics (which helped her in the film "Charlie and the Chocolate Factory"), swimming, modeling and, many may not know, Irish step dancing. Robb also recorded her own single for the film "Bridge to Terabithia" (which she co-starred in with Josh Hutcherson), called “You’ve Got To Keep Your Mind Wide Open.”

5. She has a craving to see the world
AnnaSophia Robb has a lot of moxie and drive for a 19-year-old. She is always stepping out of her comfort zone, from taking on diverse acting jobs to committing herself to charity work. Her moxie also plays a dual role in her love for traveling. She has been to France, Mexico, Canada, New Zealand, the United Kingdom, Japan and India. She also loves meeting new people there: “I like big cities. I like New York, I like London, I like L.A. I like people. I get lonely, really, really easily.”

AnnaSophia Robb has not only added flair to the CW network, but she also has added a new spark to the acting scene that hasn’t gone unnoticed by College Gloss. Keep Robb the radar, as she’s Hollywood’s latest “it” girl!