Posted by Kaitlyn on 7:30 AM in DIY Foodie International Foodie Rachel Davidson | Comments : 1 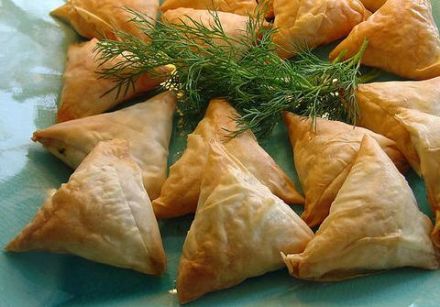 Tiropita is a classic Greek appetizer that will be sure to fill your stomach without emptying your wallet. Its primary ingredients include four types of cheeses, eggs and the traditional phyllo dough used in a variety of Greek dishes. A popular version of the Tiropita is the Tyropitakia, which literally translates into “bite-sized cheese pie.”

The main reason why college students may be able to especially appreciate this cuisine is that the ancient Greeks were incredibly frugal and founded their food on what they call the “Mediterranean triad:” wheat, olive oil and wine. Contemporary times have added a wide array of cheeses to this list, inspiring the dish we’ll create today.

1. Preheat oven to 350 degrees Fahrenheit. In a large bowl, stir all cheeses and eggs together until the consistency becomes thick and lumpy.

2. Spread out the phyllo dough on a flat surface, cutting it into four strips, and brush each strip with melted butter. To prevent drying during preparation, cover excess with wax paper and a damp towel.

3. Add approximately 1 tbsp. of cheese filling on the corner edge of a phyllo strip. Fold over the phyllo from corner to corner until entire strip is folded into a triangular shape.

4. Whisk the yolk from the third egg and brush on each folded triangle. Bake for 15-20 minutes or until golden brown in the oven.

The beauty of these cheese pies are in their versatility. In Greece, Tiropita is served around mid-morning since the traditional idea of breakfast is not common in most houses. It’s also sure to make all of your friends, housemates, or other guests happy -- especially vegetarians, who can be thankful that the Greek diet only occasionally contains meat. To switch up the recipe above, add spinach to make a “spanakopita” or diced lamb for a “bougatsa.” Whichever way you prepare it, and whichever way you serve it, you’re sure to enjoy a tasty treat while sympathizing with the Greeks by means of your own frugal college wallet.