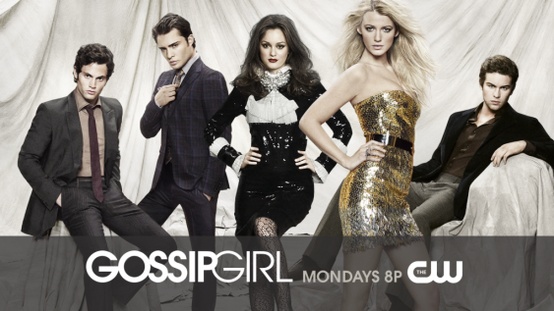 On behalf of all Upper East Sider enthusiasts, we here at College Gloss have been loyal spectators of the drama unfolded by New York City’s elites since we were in high school. Now in your final season, we must admit it’s bittersweet to see you go.

We remember freshman year of college, huddling with our new friends waiting to watch "Gossip Girl" in the fall in the common room, as Serena screwed up her life, and Blair planned everybody’s demise from Georgina Sparks to Ivy Dickinson.

And how could we forget the many holidays you spent with us. On Thanksgiving, Serena told us why she ran away after she thought she had killed a man! We then agonized with Blair through her first break up with Chuck!

We will miss catching up with you during the holidays, but what will be missed the most is catching glimpses of S’s and B’s outfits. More importantly, we’ll miss Nate’s hot piece of ass ... and oh yeah, Chuck’s and Dan’s, too, and (cough, cough) Mr. Humphrey, A.K.A. Rufus! We still don’t know how Lily could have ever traded him in for Bart Bass; it’s disturbing!

Although we do adore you, we are greatly disappointed that you have turned the oh-so-sweet Lonely Boy into a vengeful backstabber, whose dream of becoming a literary great has turned awry into the arms of groupie lovin’ girls! Georgina Sparks has created a monster! All fans once believed that Serena and Dan belonged together, and now that she has cleaned up her antics, her choice in men has improved. Maybe there is still hope -- fingers crossed!

We hate that the infamous Serena van der Woodsen is turning into a domesticated stepmother. Serena’s supposed to be the ultimate “it” girl, and she deserves the spotlight. We will adamantly admit to disliking Sage, as she is extremely annoying. Sage’s character is more of a space filler. Write her out as soon as you can! She is a pesky mosquito that will not stop whining! Plus, she ruined Queen B’s first runway show! We recommend that you send her off to a boarding school in Switzerland.

Now that you have taken Serena and Dan on to their separate paths, we hope that Blair and Chuck find a way to be together again, sorry Dair fans. Yes, it sounds a little dramatic; but we don’t know if you remember about a series called Beverly Hills 90210. Until this day we still cannot believe that Kelly and Brandon didn’t end up together! It was so devastating.

We guarantee that if Blair and Chuck don’t find a way to be evil geniuses together, you will have fans outraged! We vow to throw our favorite pair of heels at the TV! Here at College Gloss, we have been rooting for Blair and Chuck forever!

P.S. Little J is returning, and that is a little suspicious. Would you just tell us who Gossip Girl is already? We are secretly hoping it’s Dorota!

Tune into the CW Monday night for an all-new episode. And don't forget to mark your calendar for the two-hour series finale December 17th!