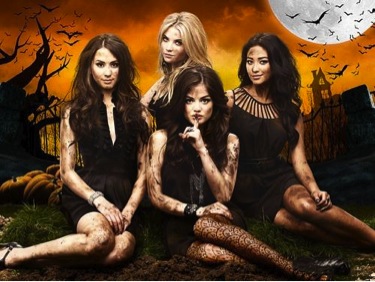 The mid-Season Three finale of "Pretty Little Liars" that aired this past August left many of us shouting at our TV for hours! The “big betrayal” was a big tease but not as inconclusive as the Halloween episode that left viewers with too many questions and no answers, kicking our Pretty Little Liars addiction into high gear.

The episode begins with the ever-so-crazy Mona creepily singing a nursery rhyme at the Sanitarium, as she works on her paper mache mask. She then turns to an obscure figure and hands the person bullets and pills! We later discover that the mysterious figure is the Queen of Hearts, whose identity is still concealed.

An air of suspicion clouds over once the foursome (Hanna, Spencer, Aria and Emily) and apparently everyone from Rosewood High is aboard the ghost train. The four liars are being watched by the Queen of Hearts and creepy baby faces (you know ... the usual). After lurking around, the Queen of Hearts pours an unidentified white powder in Aria’s drink.

After the girls realize that Aria is missing, things go a little berserk! Spencer is seen wrestling an unnamed character; Hanna is stalked by Caleb first, then by a masked man; and finally poor, little Aria is caged in crate box with Garrett's mysteriously dead body inside. Luckily, Aria is soon rescued.

While Aria is trapped, Spencer is pulled outside by Garrett before his impending death, and he confesses that he did not kill Alison. He claims that the night of Ali’s death, he saw her speaking with Aria’s father, Byron! Super brain twister!

During the flashback Byron tells Ali: “I’m not the one who makes people do these things. You don’t pay for your mistakes, how can you become a better person?”

We were floored to see him added to the equation of suspense! What could this possibly mean -- could he have been involved with Rosewood’s most dangerous Lolita, Ali? Also, remember that in Season Two Hanna confessed to Spencer that she had stolen the novel "Lolita" by Vladimir Nabokov from Ali, who had been obsessed with the book! This could definitely be an allusion to Ali and Byron’s relationship.

Another minor, creepy detail was the author’s name: an anagram for Vivian Darkbloom, Ali’s alter ego.
Back at the Marin residence, where Hanna’s mother Ashley and her boyfriend are handing out treats, Ashley encounters a little girl. This little girl inexplicably disappears at the end of the episode. But, if you’re a die-hard PLL fan, you may have recognized the little girl from a ghost story told by Ali years ago. Watch the eerie clip here.

The story was about a twin sister, about seven-years-old, who stabs her twin with a knife with a smile on her face. She is then sent to an asylum, where we assume she still remains today. Let the theories begin brewing!

Finally, on the last and most chilling moments of the Halloween episode, a fight breaks out between Toby and Noel. Toby furiously pushes Noel into a Halloween prop, a coffin filled with ice, and a body bag slips out! It may or may not be Ali’s body ... we have no idea!

Too many theories and so many possibilities -- we cannot wait for the second half of the season to begin in January! A hunch says that the writers are leading up to the ultimate reveal. To get your "Pretty Little Liars" fix, check out the winter promo here.