Foodie: How to Make Louisiana Jambalaya

Posted by Kaitlyn on 10:52 AM in DIY Foodie International Foodie Rachel Davidson | Comments : 0 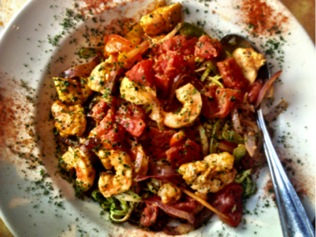 College students rarely treat themselves to the finer things -- or foods -- in life. Not enough money, energy, time ... the excuses are all the same. But even though those extra 20 minutes in the oven may often seem too long to bear, we’ve got a bona-fide Southern recipe tasty enough to be worth the wait.

Jambalaya is a Louisiana creole, with influences from Spain and France -- originating from the Caribbean Islands. Its recipe has been altered and expanded over the years, though it always carries the same bases of broth, rice and vegetables. You will need a dutch oven or crock pot to cook this, in part for the sheer size of the dish and also to ensure that all flavors are preserved and distributed evenly. Don’t let the daunting number of ingredients intimidate you: Jambalaya is typically prepared with enough servings to last more than a few days worth of leftovers.


1. Saute the sausage and ham in your dutch oven in a small pool of oil until lightly browned, then remove and save for later (but be sure to keep them warm).

2. Saute the onion, green pepper and celery for about 7-10 minutes or until tender. Add the garlic, tomatoes, thyme, salt, pepper and cayenne for five more minutes.

3. Stir in the broth, rice, water and Worcestershire sauce, bringing the entire mixture to a boil. Reduce the heat to medium and simmer the dish for 20 minutes or until rice is fully cooked. Stir in the sausage and ham mixture and shrimp, heating the whole dish through.

Vegetarians can substitute the meat or shellfish for the preferred greens of their choice.

And if the chef wants to inspire even a little more of the South into this dish, it’s simple to add cajun spices for a hotter, more mouth-watering masterpiece. Pair your jambalaya with some oysters or bananas foster for dessert to treat your body, mind, friends and family!