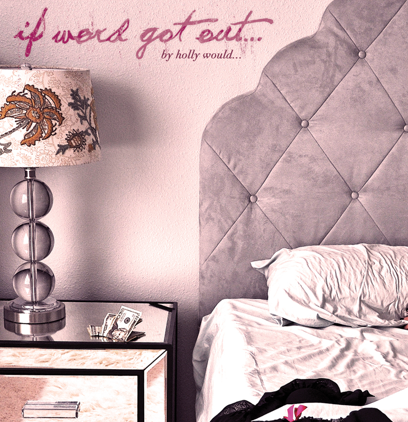 David Elliot, 22, Cory Ward, 24, Kevin Criner, 24, and Justyn Hayes, 23, are the four frontmen of the hot up-and-coming rock ‘n’ roll band Holly Would, and with the release of the single “Ida” of their first full length, it’s clear these guys are ready to make it big in the music industry. Their band formed when David and Cory were in college (they had become friends in high school through their school’s marching band). David didn’t love his college experience as much as he’d hoped he would and “had been writing music instead of doing schoolwork.” So when Cory initiated the idea of playing music together again, David said the “timing was perfect.” After the guys decided they wanted to start making music, everything fell into place.

Holly Would’s debut album “If Word Got Out” gives listeners a perfect taste of who this band is: a fun, get-up-and-dance group who wants to leave listeners with a smile on their face and Holly Would tunes constantly stuck in their heads (in a good way!). The album wasn’t made overnight, though, it took a year of writing material and recording, and the fact that the boys put so much effort into the music is what makes the album so great. All of the songs are completely authentic and filled with passion.

So, what will fans expect to hear on the album? We’ll let Elliot do the talking: “Everyone has secrets, some a lot more than others. By no means are we perfect, and with this album we wanted to make sure people knew that we stick true to our raw, gritty nature. Fact is, we are human, and we have done a lot of dirty, scandalous and even trifling things, and ‘if word got out’ we probably would be going to hell ... or at least jail ... Without telling anyone too much, the album is definitely a chance for us to face down, and, in some cases, make peace with some of our demons. And hey, in the process ‘if word got out’ about Holly Would ... as a band ... well, time will tell.”

The album is filled with amazing songs and a stand-out tune, “Ida.” “Ida” was the first song the group finished writing for the album, which is what makes it a favorite of the members. “It is a very fun, high energy song, perfect for popping in your car on a sunny day and rolling around windows down, but it still has the raw rock, big choruses and even bigger bridge that makes a Holly Would … song.” Sounds like our kind of music!

Holly Would is one band you’re definitely going to want to keep on your radar! These guys have big plans for the future, including dreams of collaborating with Missy Elliot and Drake as well as a very exciting cross-country tour! Holly Would is a band that strives to be different and wants to make their mark in the industry (and on your iPod). They want their fans to be inspired by their songs.

“We want to challenge people to not only be themselves, but to decide how things affect them and to see things (us included) through their own eyes,” Elliot said. “With pop culture being so ‘cookie cutter’ and force-fed to the masses, nowadays, this can be a very difficult task. Nobody is exactly the same, and that’s the mentality that really got Holly Would ... going. Kevin, Cory, David and Justyn all come from such different backgrounds that it is probably difficult for one to comprehend how we even fit together; however, it’s also in each other’s individuality's that we found best friends and perfect band mates.” Bottom line: the word’s out … Holly Would is a fantastic band! 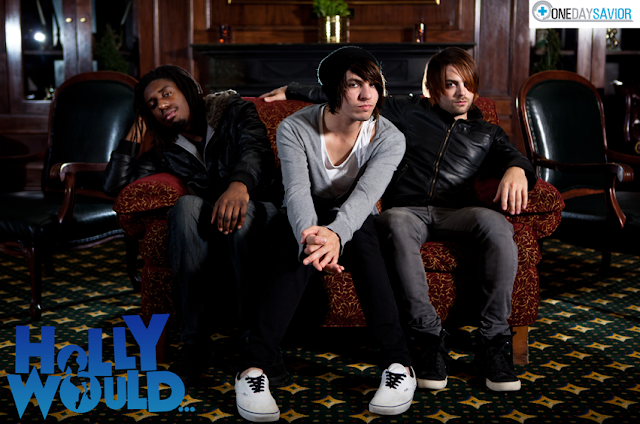 How would your friends describe you?

DE: Honestly, they would probably describe us as wild, reckless, honest, genuine, dumbasses. We are always very real, but we like to have a good time and make sure that everyone around us is also having a good time.

What are some of your hobbies?
DE: We really love to cook, and not to toot our horn, but we’re pretty good at it. We’re actually grilling some ribs right at this moment! We also really love dancing. If we had more money you would constantly see us at the club doing work on the floor!

What is one thing your fans don’t know about you?
DE: We are actually major dorks. Cory is a major comic book and computer geek, Kevin is obsessed with spreadsheets and financial equations, Justyn is a car junkie and I am a regional and district Yu-Gi-Oh! Card champion.

Did you always know you wanted a career in music?
DE: Well, always is a pretty long time. I actually originally wanted to be a lawyer, but once I played my first show with Cory at a high school talent show, I knew that there was nothing else I could ever want to do more! I know all the other guys have very similar stories, views.

What is your first memory of music?
DE: My first memory of music was driving to Idaho as a kid listening to The Singing Doodleberries with my family. I remember the first CD I bought was The Wallflowers’s “Bringing Down the Horse” followed by Backstreet Boy’s self-titled. In the sixth grade I started playing saxophone in the school band, which really got me going where I really started to love music. In the ninth grade my mom agreed to get me my first guitar and lessons because I had made straight A’s through all of middle school, and that was really the beginning of the end, as she would say.

What is the best part of being a musician?
DE: I think the best part about being a musician is the stacks of money and tons of drugs (this is, in fact, a completely sarcastic statement, as we are actually completely broke and do not do drugs). But seriously, the best part is probably a toss-up between hearing stories from so many of how our music has affected or helped them and having the ability to do what we love and getting to express ourselves through the music we play.

What is your advice for aspiring artists?
DE: Get an education! Do at least a couple years of college. As much as I do not like college, the education I have gotten even just from just being on campus has been invaluable. You can be the best band in the world with the best songs ever, but ultimately you also have to be a business. Understanding simple business principles, how to properly write and basic communication theories will prove to be the most useful skills you can have.

How do you want to inspire people with your music?
DE: We want our fans to define their own individual views and ideas. We want to challenge people to not only be themselves, but to decide how things affect them and to see things (us included) through their own eyes; with pop culture being so “cookie cutter” and force-fed to the masses, nowadays, this can be a very difficult task. Nobody is exactly the same, and that’s the mentality that really got Holly Would ... going. Kevin, Cory, David and Justyn all come from such different backgrounds that it is probably difficult for one to comprehend how we even fit together; however, it’s also in each other’s individuality's that we found best friends and perfect band mates.

Who are your favorite singers?
DE: My favorite vocalists consist of Patrick Stump (Fall Out Boy), Frank Sinatra and Drake. I like a lot of different styles of music.

What is your favorite song right now?
DE: I’m always listening to so much music, it’s hard to pick just one, but I’ve been really digging on “Super Rich Kids” by Frank Ocean, “Broken Hearted” by Karmin and, a throwback but still awesome, “Heroin Girl” by Everclear.

Where do you want your career to be in the next few years?
DE: Our biggest goal is to get to where the band can be self-sustaining, and we can solely focus on writing awesome music and playing killer shows so that we can be constantly meeting and interacting with new people. Of course, the sky is the limit so time will tell how high we can get.

Holly Would's music can be purchased on iTunes.

If you're loving the band or wanting to hear their awesome tunes, enter to win Holly Would's new CD, a t-shirt and a special surprise bonus! One (1) of our lucky winners will receive the prize bundle. All you have to do to enter is "like" College Gloss on Facebook and comment below with your name and email address. 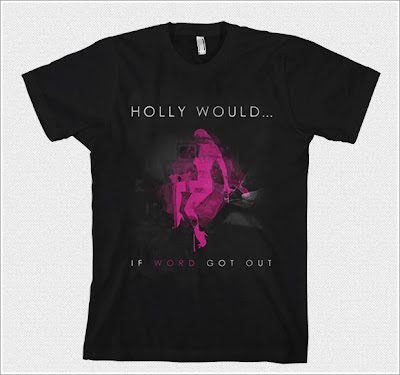 T-shirts are available in sizes XS-XL.

By: Annie Robinson | Images: Holy Would