Posted by Kaitlyn on 11:18 AM in Chinea Rodriguez Fashion Pop | Comments : 1 Some of the biggest news from the Primetime Emmys wasn’t who took home what award, but what they were wearing -- from the glam designer dresses to the manicures (like Kelly Osbourne’s pricey mani), all eyes were on the red carpet. Sofia Vergara’s wardrobe malfunction was almost bigger news than "Modern Family’s" award win. The red carpet was full of seriously gorgeous dresses with plenty of sequins, floor grazing gowns and surprisingly a lot of yellow. Here is CG's list of the best and worst dressed!

Nicole Kidman showed up in a white gown with a blue jeweled bodice by Antonio Berardi, and we're pretty sure this dress was fresh off the runway in London. [Huffington Post]

The always amazing "Parks & Recreation" star Amy Poehler hit the red carpet in a black dress by Stella McCartney and accessorized with a ring her son gave her. So cute! [Celebuzz]

In a bold move, "Bridesmaids" star Kristen Wiig wore a simple white Balenciaga slip dress as opposed to an over-the-top gown. The dress was actually from the spring 2006 collection, and it was our favorite of the night (that was one of our favorite collections!). [Fabsugar]

Elementary star Lucy Liu went for a silver, sequined number by Versace. Versace is known for sexy and strong gowns and this dress is no exception. [Elle]

Emilia Clarke of the hugely popular series "Game of Thrones" wore a dress from Chanel Resort. She paired the white dress with violet floral detailing from the Marie Antoinette-inspired collection with nude shoes, dangling earring and a chic updo. [JustJared]

January Jones looked bewitching in a black dress by Zac Posen. With a wisely chosen smokey eye and slicked back hair, her dress really stood out! [Elle]

And now the worst! 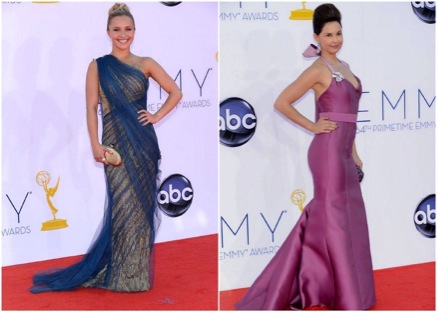 Hayden Panettiere wore a Marchesa dress from their latest collection, and while it was a beautiful dress, it was too big and overpowered her! [LA Times]

While we usually can’t say no to a Prada dress, Lena Dunham’s unflattering dress has us all confused. It’s not a bad dress, but the fit is all wrong! [E!online]

Ashley Judd went with a pretty simple pink dress, not our favorite but not the worst. Her sky-high hair is what landed her on multiple worst dressed lists. [E!online]

The Emmy red carpet has definitely stepped up a bit; stars aren’t waiting until the Academy Awards to dress up and many celebrities have ventured far from the usual mermaid style gown, even though it’s still a favorite. Okay, now spill! Who are your picks for best and worst dressed?