Altering Fashion Advertising for the Future

Posted by Liz on 8:00 AM in Beauty Kimberly Suchy Style | Comments : 2 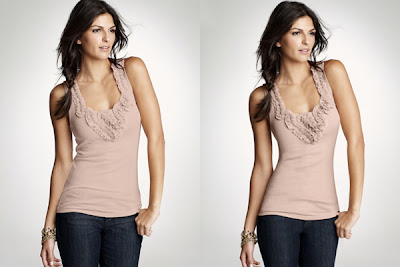 Flipping through the pages of any women’s magazine, advertisements and photo spreads will expose idealized images of paper-thin models. Curving their lanky bodies inward to defend their airbrushed womanhood, these Photoshopped dolls represent anything but what it means to be a real woman. Many confident viewers look past the unreality of these fashion spreads and take the images for what they are. Designers and photographers are, in fact, artists, and their malnourished models are merely vehicles in realizing their fantastical visions. However, when young girls begin using fashion magazines as literal guides for how they should look and live in their lives, the “artistic” objectification of models translates into a perversion of self worth.
While several past controversies have discouraged designers from hiring models that are too thin, the Israeli parliament took the bull by its horns on Monday, March 19, passing legislation that has put serious regulations on the fashion and advertising industries. Noting the influence that these industries have over young women and girls, the legislation has targeted two areas of criticism in order to promote a healthier, more realistic body image: unhealthily thin models and impossibly Photoshopped images. It is now illegal for models in Israel to work if they have a Body Mass Index (BMI) that is under 18.5, a level the World Health Organization considers as representing malnutrition. The new law also requires advertisers to clearly state when a photo has been altered from its original form, including airbrushing, computer editing and any form of Photoshopping used in order to construct a slimmer, more “perfected” model.
In an interview with The Atlantic, Daniel Le Grange, professor of psychiatry and director of the eating disorder program at the University of Chicago, expressed frustration with the amount of photo editing applied to the photographs in advertisements and recognized the negative message it delivers to young women.
"No one is that perfect, no one has Photoshop on their faces all day long," he said. "It's very discouraging for our patients who for one reason or another desire that perfection, and they page through every magazine and see every face that's perfect. It's easy to get scooped up that, 'I should look perfect because they all look perfect.'"
Although fashion spreads cannot be singled out as the root cause for the propensity of young women with body image issues, unrealistic portrayals of models are a large contributing factor to the eating disorder epidemics in Israel and around the world.
It would be difficult to pass Israel’s same legislation in the United States with the American cultural support for free speech and expression, but similar strides have recently been made to speak out against the detrimental effects of fashion advertising here in the US.
Julia Bluhm, a 14-year-old ballerina and activist for SPARK, an organization focused on girls' sexualization in the media, noticed how girls her age heavily weigh themselves against the models portrayed in magazines. Demanding a more realistic rendering of women, she targeted Seventeen, her favorite magazine, and started a petition asking them to produce one unedited photo spread per month. These were some pretty hefty demands coming from a 14-year-old, but Bluhm managed to get 46,000 signatures on a petition through change.org.
Editor in Chief of Seventeen, Ann Shoket, responded to the call by inviting Julia and her mother to discuss body image at the magazine’s New York City headquarters. Being one of the few magazines that consciously portrays young women’s authentic beauty, it was a surprise that Bluhm targeted Seventeen.
Even through all the negative press Seventeen received as a result of Bluhm’s petition, Shoket managed to praise the young girl’s drive in an interview with the New York Times.
“What power she has to have an idea and to make her mark on the world,” she said.
As of now, Seventeen has not made any public agreements to concede to Bluhm’s wish of publishing unaltered photo spreads. However, the fact that there is now a public discussion surrounding activism for women’s body image marks huge strides in eventual change. We may not see a ban on magazines altering their published photos anytime in the near future, or even a law similar to Israel’s that makes it impossible for malnourished models to enter the work force, but with the combined power of passionate voices like Julia Bluhm’s and a true sense of seriousness about the issue, we may one day see real women pictured as they naturally are—blemishes and all.
By: Kimberly Suchy | Sources: 1, 2, 3 | Image: Source