What To Do When Your Best Guy Friend Gets A Girlfriend 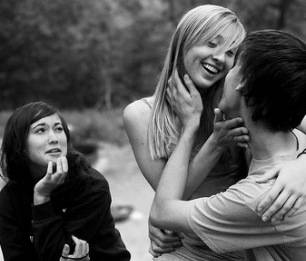 When a guy and a girl are best friends, some people will automatically assume that they like each other. And when the guy gets a girlfriend, suddenly the friend is classified as the other woman.

Here’s the scene: you have a best guy friend who gets a girlfriend—suddenly, it’s as if homeboy has disappeared off the face of the earth. Until, he wants you to meet her, forcing you to sit through a tortuous session of their PDA—only to have them finally take a break and actually speak to you. Well, he speaks to you, his new girl just sits and glares—sizing you up and your relationship with her new boyfriend.

I’m sure a lot of girls have been put in this situation before, where their best guy friends’ girlfriend just doesn’t approve of their close friendship. This is how to ease the situation and help this girl see the light.

Be nice and socialize:
Even when she’s being mean to you, don’t get down to her immature level. She may be a insecure and spread rumours about how you’re trying to be a little man stealer. But, by giving in to her drama, you’re being no better than her. You need to try your best to be nice to her, even if it’s a little forced in the beginning. Don’t be a suck up, just try to go a little out of your way to get her to warm up to you.

Make sure that she knows that there's nothing fishy going on:
If you want to spend time with him, then you’ve got to find a way to get her off your back. This can simply be done by letting her strictly know what your intentions are and are not. Explain the close friendship with her. If she really isn’t giving in, then let her know that you sincerely just see him as a brother, and doing anything with him would be so… ugh. For extra effect, say it with a sickened face and shiver.

Fill your life with other friendships/relationships:
If your best guy friend is willing to ditch you for his new girlfriend, no matter how close you two are, then he’s not worth it. Seek out other friendships with other guys, and maybe even fill your life with a boo of your own. And if that person happens to be one of his best guy friends, then well, brownie points for you girl!