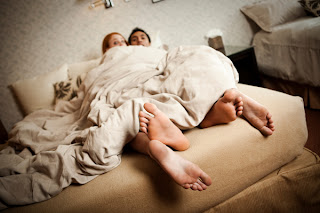 In the olden days, any kind of hooking up in the family tree or anything close usually led to your head being, well, chopped off. Or as the Queen of Hearts from Alice in Wonderland would say, “Off with her head!” But now, in campuses all over the world, ‘dormcest’ as some like to call it, leads straight to total and complete awkwardness—most of the time.

So, what is dormcest exactly? The word screams ew, but really, it’s not as bad as you think. Dormcest is when you partake in hooking up, or dating someone that lives in your dorm. But the problem here is simply, what if things end badly? Brace yourself for awkward run-ins in the hall, possibly dirty glances, and lots of gossip. Makes you think twice, huh? But, it doesn’t always end that way, there are pros and cons to hooking up with the hot guy down the hall.

Here are some of the Do’s and Don’ts of dormcest that you should consider:

Do make some guidelines before hand:
If you meet a really cute guy that you could see yourself dating or just hooking up with, then before you do anything, make some rules that you both have to follow during and in the event that things end badly. For example, say you dated then broke up—instead of plotting out the safe zones of your dorm where he likely won’t be, you should both agree to be friendly when you see each other in the hall, or see one of you with a new boo.

Don’t do anything while your roommate is in the same room:
First, gross. And second, ugh, gross. How would you like it to wake up hearing strange sounds from the next bed over? Exactly. You need to treat your roommate exactly how you’d like to be treated. And I’d hope that means with a lot of respect.

Do stay focused on your life and your studies:
Just because you found a really great guy doesn’t mean that you should stop focusing on yourself. You need to do what you came to university or college to do: succeed! A lot of people might say that your studies, plus partying is important. Which, is totally fine, too. Just make sure that you’re using university for what you came there to do. It’s nice to party and have fun, just don’t lose sight of the goal in mind.

Don’t gossip about him after the fling is over:
If things go awry, or he breaks off your fling, don’t think that gossiping about him and his, er, performance is going to stop other ladies from going out with him. Plus, by gossiping, it’s only going to make you appear pathetic and immature.

Do use condoms:
This is a no brainer. It’s not going to be a good ole time if you have to drop out of university because you got knocked up. And just like Gwyneth Paltrow said during her guest appearance on Glee, “Everybody’s got a random.” It can be true, so use a condom, protect yourself!

Don’t get too attached:
From the movies “No Strings Attached” and “Friends with Benefits” we’ve learned that it’s not all that easy to just hook up and not have any feelings. Even DJ Pauly D admitted that he’s never met a girl that could ‘just’ hook up. So, if you’re in a casual relationship right now, it’s probably better not to invest too much into it. If you really don’t want to get hurt, either try really hard to keep it light, or simply just end the fling.