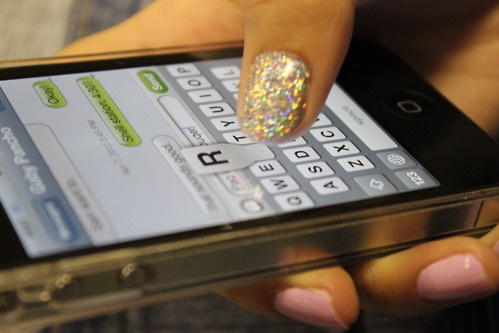 Text messaging has permanently altered the way men and women communicate with each other when it comes to dating and love. Many of us over-analyze the romantic dilemmas that occur because of text messaging, but follow this advice to avoid the seven deadly sins of texting your man:

Wrath, or anger, happens all too often when texting. When talking in person, you can read your guy’s body language and listen to his tone of voice to understand what he means. Without these cues, deciphering an ambiguous text message can be maddening and can lead to many misunderstandings. Don’t lash out via text message if you’re upset with your man! Call him to talk it out instead.

If you’re playing the field a bit, it can be tempting to mass text a few guys to see who will “bite,” so to speak. This is greedy and unfair to the poor chaps who think they’re the sole recipient of your message. If you must text multiple dudes at once, you should at least send out individual messages with personalized greetings. Play on, player. Play on.

In this day and age, the cell phone is practically a new appendage on the human body. We all know that everyone keeps his or her phone close by, so don’t be a sloth and lazily take hours to reply to a text. This goes double if you’re texting about plans the two of you have later. Sloth-like behavior leaves the other person hanging while making you seem uninterested, both of which negatively impact your relationship.

So he’s a player – or a sloth – and took one whole day to respond to your text. Many times, a girl’s pride will demand that she wait an equal amount of time before replying. This tactic is counterproductive, as he likely doesn’t care about you or your text very much to begin with, or else he would have responded ASAP. Playing games by timing your reply to his tardy texts is an utter waste of your time and energy.

The rise of “sexting” has made many a lady vulnerable to the ugly side of text messaging. Never send your guy sexy pictures or suggestive messages if you are not in a committed relationship – and even then, you might want to keep your guard up. Once a lusty message is sent, there is no way of taking it back; if things go awry, you’ve already sent him all of the blackmail material he needs.

If girl feels jealous, and checks her guy’s phone for evidence of flirtatious texts he may have sent or received, it all goes downhill from there. Never look at the messages in his phone. It’s wrong and breaks trust between the two of you forever. Having the urge to snoop in the first place means there are greater issues at hand in the relationship; express your feelings of envy directly to save time and heartache.

Texting is quick and easy and has conditioned us to expect rapid responses and constant communication. A gluttonous texter can’t put down her phone because she’s texting her guy that her breakfast smells weird or that her shoe is pinching her foot or that she saw a pigeon with one wing. Some things are better left untexted. Use texts sparingly, as a way of checking in or saying hello, and they become all the sweeter.