Posted by LaurenSawyer on 4:51 PM in Jasmine McCain Love | Comments : 8 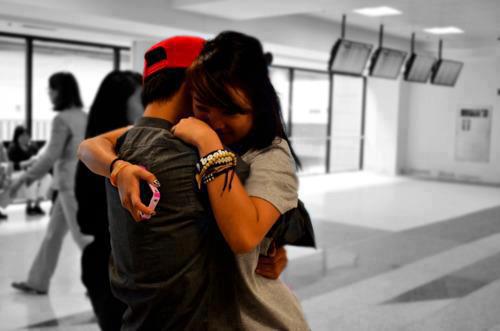 A long-distance relationship with your campus cutie is soon to change as you reunite for fall semester. You’ll bid adieu to the Skype sessions, late-night phone calls and texting, and you’ll get to say hello to your beau in person. But after spending the summer working your tail off, networking like crazy and growing into a professional -- how’s a couple to go from being on opposite ends of the country for internships to living in the same building or city, all while staying true to who you’ve become and to whom you once were your relationship?

Reunited, and It Feels So Good
When reuniting, don’t do anything that could yield regret, but that moment of meeting all over again should be cherished. Relearn each other’s face and smile, spend the day remembering what it’s like to hold hands, send the butterflies in your stomach back into flight. After the inseparable period, the honeymoon phase, wears off and life feels real again, figure out just how much time to spend together. Dr. Marie Hartwell-Walker, a licensed psychologist and family and marriage counselor, wrote, “couples that succeed put boundaries around their time together so that they have time and space for intimacy and renewal.”

Relationship writer Jack Kody echoes this notion and wrote that a person should find the balance between “ME (individual needs)” and “US (the needs of a relationship),” as too much ME can cause a relationship to end and too much US can cause resentment and conflict. He gave practical tips for avoiding said resentment in writing, “However exciting it is to spend time together, remember that there are places to be and things both of you have to do. Your world should never revolve around one person or relationship.”

Share Daily Activities
Sharing daily activities doesn’t mean that a couple should spend everyday together after there’s no more distance to overcome. According to The (Former) Center for the Study of Long Distance Relationships (it is no longer in operation), it’s likely that in a long-distance relationship a couple easily shares emotions but doesn’t share what’s called ”interrelatedness.”

The Center uses the example, “Guess what happened to me at the grocery store,” and notes that a geographically close couple may bring this up while cuddling. On the other hand, a long-distance couple would likely not think to chat about this little adventure. “Although the content may seem trivial, the unconscious connection formed between partners with each little interaction, such as this, forms the foundation of intimacy,” the Center said. They urge individuals to be apart of the mundane, day-to-day tasks that their partners experience because it creates intimacy, just like a couple that sees each other for dinner at night is able to have.

Don’t Forget Everyone Else
It can be tempting to trail off into a fantasy world with that someone special, but friends shouldn’t take the boot just because your man’s back in town. Walker says it’s important to make the long-distance relationship visual. “The colleagues and friends of a person in a long-distance relationship aren’t as apt to see their friend as part of a couple because the couple isn’t visible,” she wrote. Wouldn’t it be a shame for a partner to move back to town and for his lady to hog all his time? Instead, introduce him to your new colleagues and the other young professionals you’ve met while at your internship or summer job. Remind people that you really are in a relationship so that they can support the partnership.

Reevaluate
After readjusting to being in closer, it’s time for some reevaluating. That may mean discussing the next step of the relationship or just go back to how things were before the miles created distance. A couple likely has a whole list of things they talked about over the phone that they would do if they were near each other; start crossing things off that bucket list -- the exhibit at the museum, that date in the hot air balloon, the picnic at sunset. Other couples will want to take steps toward even more commitment once reuniting, like moving in together or getting engaged, which therapist Johanna Nauraine has seen in her experience.

Every couple is different, and just like each has to figure out how to combat long-distance dating, each has to figure out what their relationship looks like afterward. Syra A. Jan, a relationship strategist, puts this difficulty perfectly: “People don’t think about having to readjust their lives, their schedules, or their living spaces. You may have to change your work schedule, coordinate with your partner more, or spend time with each other’s friends and families.” Long-distance relationship shouldn’t be burdensome, but a post-long-distance relationship can work as long as the couple has a plan and commits to making an extra effort to potentially figuring the partnership out all over again. In the process, you may even find out that absence isn’t necessary to make the heart grow fonder after all.