7 Essentials for Keeping Your Head in the Hockey Game

Posted by Kaitlyn on 10:24 AM in 7 Essentials For Lifestyle Sarah Mattoon | Comments : 0 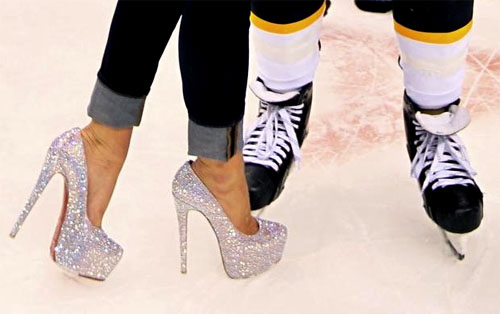 It’s back! The NHL lockout finally came to an end, and we are ready for a shorter, but highly anticipated season of hockey! Football season ended with a bang on Super Bowl Sunday, and we are not just talking about Beyoncé’s heart-pounding halftime show with a Destiny’s Child comeback. While we eagerly wait for the warmer weather and baseball season to start, it is time to throw on those ice-skates, bundle up and let the guys know that hockey is not just a boy’s game!

1) Roll Call
Know the basics. Each team has six men on the ice at a time: two forwards, a center, two defensemen and a goalie. The forwards and defensemen dress and look very similar to collectively be recognized as skaters rather than the goaltenders. Unlike the skaters, the goalie wears leg guards, knee pads, a facemask and has a special catching glove for more protection.

2) The Final Countdown
Three 20-minute periods constitute a regulation game. In the event of overtime, there will be a five-minute overtime period. It is sudden death, so whoever scores first, wins. If it is still tied, there is a penalty shootout. Three players from each team will get a shot. Whoever has the most goals after three rounds, wins. If it is still tied, then it goes in cycles of one.

3) On the Ice
A standard hockey puck weighs roughly six ounces, and each player uses a stick to retrieve, control, pass and shoot the puck. Imagine racing down the rink in skates, in the hopes of scoring a goal through a net that measures four feet tall and six feet wide; talk about a rush of endurance. The circles that are strategically placed around the ice are called faceoff circles. This is where the ref drops the puck to resume the game after a stoppage of play.

4) Watch Out
The centerline divides the ice into two sides. The two blue lines on either side are the offside lines. A player cannot be across their offensive blue line before the puck or before the player with the puck crosses it. If a player violates this rule, it is called being offside.

5) Scoreboard
A goal is scored when the puck fully crosses the goal line, and each goal is one point. An assist will be recognized to the player or players who helped the scoring player get the puck in the goal. In the event of a disallowed goal, such as the puck being kicked into the goal or if the puck bounces off an official and goes into the net, the goal is not counted.

6) Put Him in the Box
A minor penalty is two minutes, a double-minor is four minutes, and a major is five minutes. Penalties include cross-checking, interference, roughing, elbowing, delay-of-game, hooking, slashing, tripping, high-sticking and fighting. Players are sent to the penalty box -- also known as the “Sin Bin” in hockey language -- and their team must play a man down for the duration of the penalty.

7) Add Them Up
At the end of the game, the winning team gets two points for their victory added to their overall ranking. The losing team does not receive any points, but in the event of an overtime loss, one point is given to the losing team.

Next time the boys are sitting down, or even screaming at the television while watching the game, don’t sit back and look pretty. Show off your knowledge and get pumped! Ready, set, GO TEAM!