Posted by Kaitlyn on 7:30 AM in 5 Reasons We Love Lifestyle Mallory Feeney Pop | Comments : 2 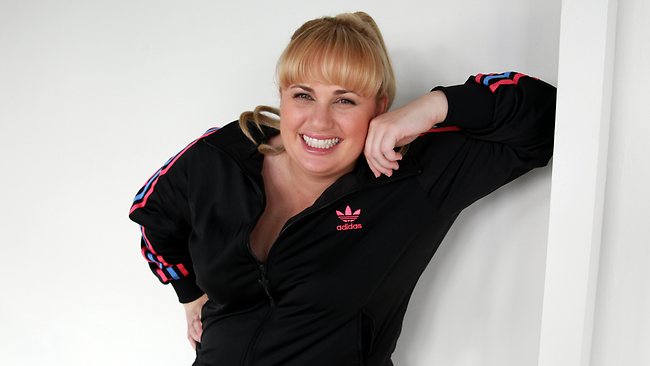 Rebel Wilson, Aussie actress and zealous comedian, has made quite a splash in Hollywood. This Sydney native grew up quiet and shy, though many wouldn’t guess with her charisma and talent! She has starred in recent blockbusters such as "Bridesmaids," with Kristen Wiig, and "Pitch Perfect," with Anna Kendrick. Wilson has mastered the art of wit and comedic timing that was missing in the entertainment world.

Her sense of humor and appeal to the college crowd hasn’t gone unnoticed, as she was recently named the host of the 2013 MTV Movie Awards! Along with landing the coveted gig as host of the MTV Movie Awards, she will star in upcoming flicks: "Struck by Lightning," with Chris Colfer, and "Pain & Gain," with Mark Wahlberg.

Read on for five reasons why CG is totally obsessed with Rebel Wilson, the rebel with a comedic cause!

1. She is Fearless! Rebel Wilson may have been been a shy child, but she has transitioned into a brazen comedic actress! Wilson is both bold and daring, and her decision to pursue acting professionally was nothing less than that! According to ellentv.com, Wilson had contracted malaria while working in South Africa as a Rotary International Youth Ambassador, which resulted in feverish hallucinations of herself as an award-winning actress. She interpreted this as a sign, and soon after she packed her bags and headed to Los Angeles to begin an acting career.

2. She is Fresh! Wilson has taken the entertainment world by storm with her comedic intuition and fresh look that is different from many of her female counterparts in Hollywood. With her breakout role in "Bridesmaids," Wilson began to establish herself as an on point and sharp actress, a trait that is hard to come by in up-and-coming stars.

3. She is Funny! This 27-year-old is down to earth and brings an amusing sense of wit and banter to each role, similar to leading ladies such as as Kristen Wiig, Amy Poehler and Tina Fey. Also, some of her humor can be noted off screen -- it’s trending! Wilson’s twitter account (@RebelWilson) stirs up lots of laughs.

4. She is Full of Surprises! Although it’s no surprise that Wilson is one of the most brilliant entertainers of our time, many may not know that she also has a law degree! As a kid, Wilson did well academically, especially with math. In an interview with movieline.com, Wilson explained that she has used her law degree to her advantage, especially when it comes to her acting contracts.

5. She Keeps Moving Forward! Along with landing her gig as the 2013 MTV Movie Awards host, Wilson has many new projects ahead of her. Besides her upcoming films, Wilson’s sitcom that she wrote, "Super Fun Night," was recently picked up by ABC. A pilot series is in the works. Rebel Wilson acts, writes and can now also add producer to her resume.

Rebel Wilson is a major inspiration to CG. Wilson has shown that it’s okay to have curves in Hollywood (noted in her memorable role as “Fat Amy” in Pitch Perfect), and she won’t let anything stand in her way of achieving her goals. Her recent successes branded her as an influential female comedic powerhouse. College Gloss is anticipating many more successes!