Foodie: How to Make Vietnamese Pho

Posted by Kaitlyn on 7:30 AM in DIY Foodie International Foodie Rachel Davidson | Comments : 2 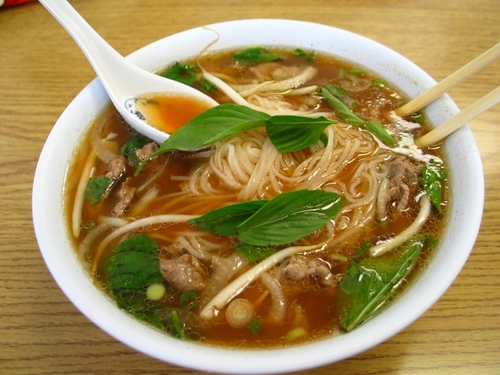 Pho, [pronounced: fuh], is a delicious combination of broth and noodles ... and it’s quickly becoming the college student’s new Ramen. Pho restaurants are popping up left and right as its popularity steadily grows in the States, and there are a number of different recipes that allow you to make this masterpiece at home.

Pho has only been around for the last 100 years or so, making an especially big splash in its native country, Vietnam. The first pho restaurant opened in 1920, and it wasn’t even considered popular in South Vietnam until around the 1950s. It’s been suggested that its name came from the word “fun” as pronounced in Cantonese. In 2011, CNN dubbed pho the 28th “World’s 50 Most Delicious Foods.”


As most recipes go, feel free to substitute beef with chicken or extra vegetables to better adhere to your personal taste. The garnishes listed above are common in pho today, though they weren’t part of the traditional recipe and were only added during the 1970s when Vietnam refugees fleeing the country introduced pho to other parts of the world.

1. Combine beef broth, onion, ginger, lemon grass, cinnamon and peppercorns in a large soup pot. Bring all ingredients to a boil before reducing the heat and covering the pot. Let simmer on medium heat for one hour.

2. Arrange all garnishes and sauces on a platter with chilies or peppers.

3. Cook rice noodles in a separate pot on the stove for 15 minutes, or until soft. Drain these and place plain noodles into soup bowls (recipe serves six). Place raw beef on top of noodles and dish out hot broth/soup over each combination of noodles and beef. Add garnishes and sauces as desired.

The best part about this recipe? It’ll feed a full house for just a few dollars per serving. So toss out your old bags of Ramen or instant noodles, and set your standards higher with pho.