TV Talk: Why We Love Revenge 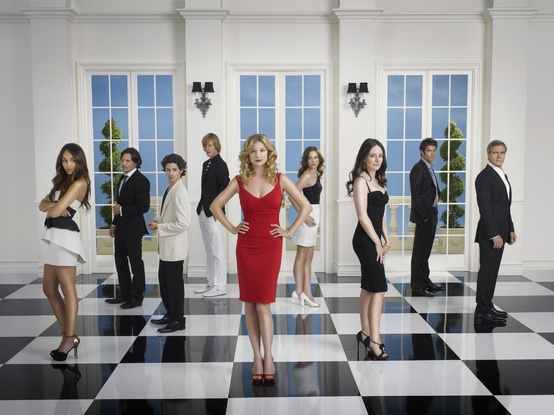 “Revenge” is one of the most addicting shows this season! We would have never thought that summer in the Hamptons, other than the produced drama on “The Real Housewives of New York,” could be so scandalous.

Unlike other TV series like “Pretty Little Liars” or "Once Upon a Time,” where you could theorize for days on who’s who, “Revenge” keeps us guessing and surprises us in every episode. There are no space fillers here, ladies!

After the Season One finale, we were extremely devastated by the death of Victoria Grayson. She is not only possibly the best and most elegant villain on TV right now, but she is also the heart of Emily Thorne’s plan for sweet revenge. But we found relief early in Season Two after Charlotte reveals to Emily that her mother is, in fact, alive. Without “Queen” Victoria, there is no motivation, no evidence and certainly no focal point.

While Emily keeps kicking the Grayson’s down with ploys such as breaking her engagement with Daniel (poor Daniel; revenge is not as sweet when you have such attractive collateral damage) or getting Victoria’s husband Conrad arrested, Victoria continues to find ways to claw and manipulate her way back up to the surface and survive. We know, we know, some of you are already wishing that she would be axed by some horrific tragedy, but we must defend our Queen Victoria. We love to hate her.

We are huge fans of Victoria and Emily, who are actually more alike than they know. They are clever, powerful women, who hide their cards well and play the game neck-in-neck. Victoria may have done horrible things, but so has Emily. And surprisingly, Victoria has proven to be remorseful!

She had loved Emily’s father David Clarke during their torrid affair, much more than Conrad. Like Emily, we often see moments of vulnerability in Victoria’s eyes. She loves her children more than her own life and safety and wishes she had run off with her true love, David.

Victoria tried to redeem herself before the end of Season One. When she discovered that Conrad had been behind David Clarke’s incarcerated murder, Victoria attempted to reveal the truth about her husband’s criminal involvement.

Victoria lies. By no means are we applauding weaving webs of lies, Victoria is a fictional character and her extenuating circumstances have caused her to become a raging bitch, but with a purpose! Although she fabricated one of the most outrageous lies in TV history by blaming the white-haired man (A.K.A. Gordon Murphy) of an abduction that had never happened, it was a necessary evil. She had to protect herself to seek revenge of her own against her conniving husband.

Yes, we love to decipher Emily’s troubled past and watching the love triangle between the oh-so-handsome and innocent, Jack Porter, and the fake Amanda Clarke, but we truly love Victoria Grayson’s character. She is the modern day version of an evil queen; she is beautiful, poised, elegant and deeply tormented inside. We believe that she is really not as evil as she seems! We wouldn’t be surprised if Emily and Victoria find a common ground and bring down Conrad and anybody else who was responsible for Daniel Clarke’s ruined reputation and death!