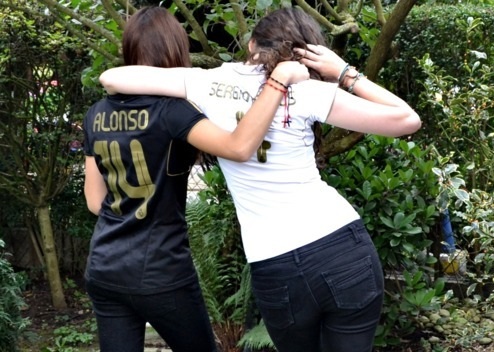 Lately I've been thinking about how I am as a person and what I could be doing wrong to steer guys away. Not saying that there is something wrong with me, but there must be something that doesn't exactly scream "Date me!" I started asking my guy friends why. "If I don't pay attention to sports does that automatically cast me off?" Obviously, the answer is no. But sometimes, guys do like girls who know about sports, video games, etc.

Having only paid attention to the Yankees (if I didn't, my Dad would have a fit) and played the super old video games (break out the 1980's Super Mario Bros.), I guess I have some experience and even my own ways of being a "guy's girl". But I don't go around reading the history of soccer and its players or know everything there is to know about the L.A. Lakers. I don't even know what the correct technical terms are for those sports. This lead me to question, do guys really like a guy's girl, or a girl's girl?

Directly quoting my friend Dan, "If a girl likes video games and knows about sports AND she's hot, it's the ultimate catch." Spoken like a true man! To be honest I can't even go against this. If I were a guy, I would probably want a girl to be chill enough to play video games with me or watch a game, drink a beer, and actually know what was going on. But what about the girly girls with no interest in sports or beer? Are they still valued anymore?

Of course, it all boils down to the girls personality and what kind of guy you're looking for. Chemistry between the guy and the girl in general is still number one. Perhaps the true verdict is a girl who has the perfect balance of both. However, I am not by any means saying that girls should go learn about sports if they have absolutely no interest in the matter; don't waste your time! As cliche as it sounds, the most important thing is to just be yourself. I, nor you, should change who we are for a guy.

What do you think? Are you more of a guy's girl or a girl's girl? And what type do you think guys are more drawn to?