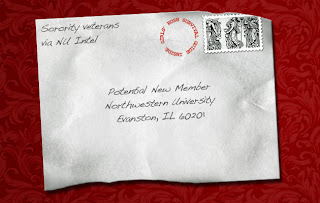 In chapter one of A Greek Love Affair, I dispelled many myths about becoming a sorority woman. Hopefully a few of you changed your mind about this life choice or are at least a little bit more intrigued. Now that you know we don’t stuff you into coffins, let’s talk about the fun stuff: Recruitment and Rush. You’re going to hear both of these terms thrown around a lot when it’s getting close to recruitment. They are practically the same thing.

Depending on what school you go to, there could be anywhere from two to twenty-six various sororities on campus. All sororities are governed by a body called Panhellenic Council. The amount of chapters that are at your school will also help determine how long the Rush process is going to last. For instance, at my school we have seven Panhellenic Chapters. Our Rush process is four days long. I have also met women from other campuses that have over fifteen chapters. Their Rush process lasts a week an a half.

The first portion of Rush regardless of how many days it lasts will be a very informal meet and greet. You will be going to each house for anywhere from thirty minutes to an hour to meet women in that chapter. The second portion, or second day, will likely be house tours. The final portion of Rush is Preference. You will be with one woman from the final houses that are going to ask you to join their chapter. Panhellenic Council will guide you along this little adventure as well as give you directions, tips and specific attire. Rush is very unique to each campus because of the diversity of chapters.

Rush is a hectic yet rewarding experience. We prepare for months so that you can have the best experience possible when meeting a chapter. There’s lots of singing, dancing, smiling and conversation. If you feel overwhelmed (which I did) that’s perfectly okay. With each house or woman you meet, it will begin to feel more comfortable.

The single, greatest piece of advice I can give you for Rush is to go into it with an open mind. You’re going to hear stereotypes, stories and many people’s opinions of each house. Don’t listen to them. Go with your gut. Pick a house because they accept you for who you are, they have the same values as you, or they simply bring out the best in you.

Next time on A Greek Love Affair: Dressing The Part