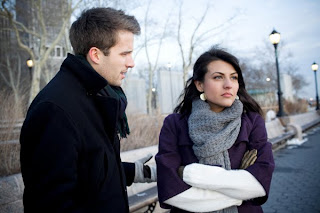 Every semester, it’s the same routine when finals near, the air becomes tense with frustration and students spend more time in the library in one weekend than they have the whole semester. This fragile state of mine causes many students to put blinders on and buckle down in order to achieve they grades they desire. But what happens when you are in a relationship? This determined attitude could lead you to fail your relationship. So, here’s how to not let the stress of finals ruin your love life.

Don't drop off the face of the planet
It may seem like doing a little disappearing act is the smartest way to ace your finals. No distractions= success, right? Wrong! Your significant other knows that finals are important time and will respect that your schedule isn’t as flexible as normal. So, instead of blowing him or her off, be honest about your lack of free time for them. Trust me, they much rather here this then feel like you are ignoring them.

Don't lash out
When under a great deal of pressure, people tend to lash out at those closest to them. I understand that it seems like there is no light at the end of the tunnel but hurting your loved one’s feelings doesn’t change your predicament. So, instead of causing a fight that will only add to your stress level, warn your honey that your emotions are a little heightened and that they haven’t done anything wrong.

Don't resent them
Just because your finals schedule is jammed packed doesn’t mean everyone else’s is. So, if your babe’s final schedule is fairly light, don’t begrudge them. They didn’t know that this would happen just like they didn’t know you would have a million things to do.

Remember finals only last week and they shouldn’t damage your relationship. So, take a deep breathe and you will survive your finals' week! Once it’s over you can out and celebrate as a couple!